Here’s a chart visualising the tallest people in the World.

The exact numbers change from year to year.

This will give you a good overview of the top 25 countries by height.

Just click the image, right-click and choose ‘Save image as..”.

(Or link to this attachment page: https://tallsome.com/wp-content/uploads/2017/09/Tallest-People-in-the-World.png) 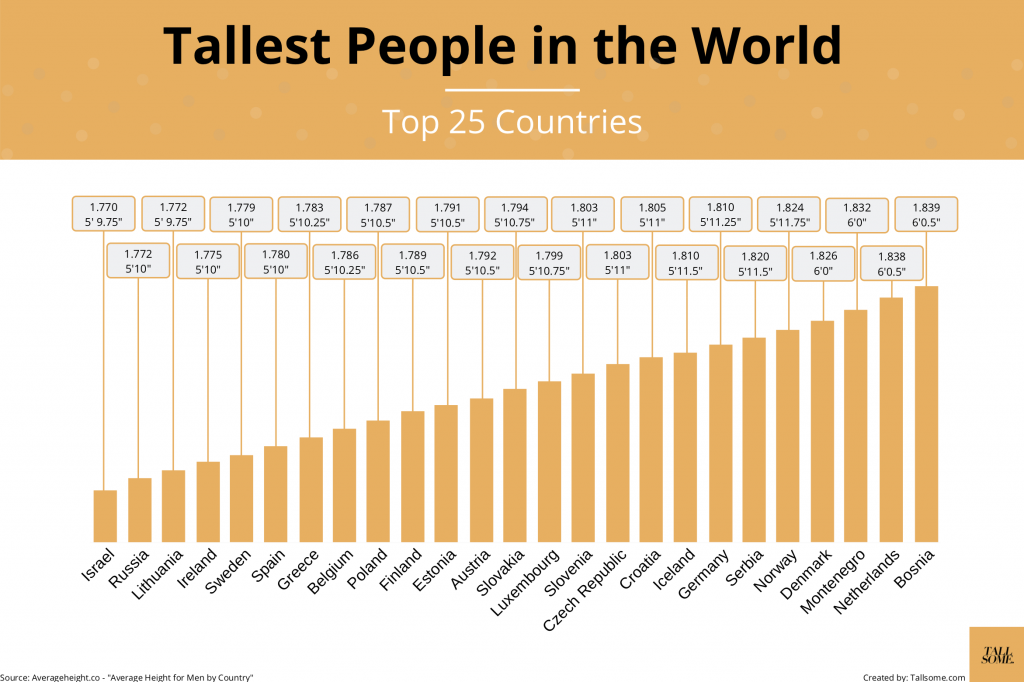 Who are the Tallest People in the World?

Here’s the list of top 25 countries sorted by their average height:

The numbers behind the tallest countries in the World change from year to year. And it is not every year the average height of a population is assessed. Therefore, there might be some discrepancy between the real-time average height divided by country the data shown in the above chart.

However, I hope that this visualisation will provide as a funny and interesting overview of the height averages across the World’s tallest countries. Not surprisingly, Northern Europe and Scandinavia is well represented in the top percentile of the tallest countries in the World.

Equally unsurprising is it that Asia is less represented at the very top of the height charts. Although, we have a few Asian countries at the bottom of the top 25; Russia and Israel. Apart from these two, the rest of the 25 tallest countries are European.

Which countries have the tallest population?

Based on the above data, the countries with the tallest population are:

The top 3 varies from year to year, as the differences in the very top is very small. This means that when a new set of data is collected, the top 3 is very likely to change. Another reason why the top 3 varies is that the population of the countries vary, as people die and new generations grow up.

A general rule however is that the average height of the tallest countries in the world goes up. This is due to better nutrition and general better health in new generations compared to generations in the past. Not only do we live longer lives – we also max out our genetic potential during our lifespan, resulting in a taller population now than earlier.

Who is the tallest person in the World?

According to Wikipedias list of the Tallest People, the living tallest persons in the world in 2020 are: 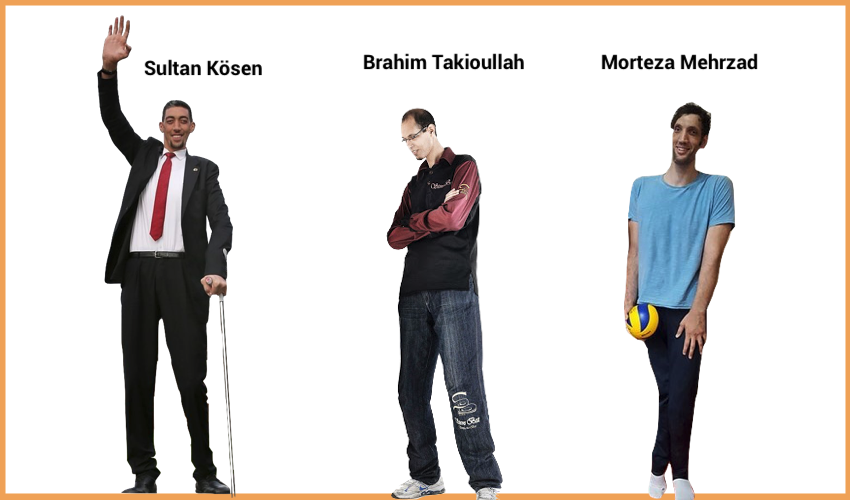 The record holders for being the tallest people are often conditioned with acromegaly, which is caused by a tumour. This affects what is called the pituitary gland that controls the growth of the body.

Sultan uses crutches to walk, as the body cannot support such growth alone. The limbs grow too long for the muscles, tendons and bones to support without external help from e.g. crutches.

The tallest man in the world is still alive, around 40 years old, and we hope he lives long and has a great life in the spot light caused by his fame as the tallest man on earth.

More about the data

As Wikipedia states on their “Average human height by country” post, there are some reasons why it is difficult to accurately determine the average height of a nation and thus – determine who the tallest group of people in the World are. The reasons why the data may be difficult to retrieve is the following:

I will update this chart, if I receive or find better data that comes closer to a real representation of the actual average height of a population. But don’t hold your breath; just used the above and linked sources as a point of departure for whatever you are going to use the insights for.

Who are the tallest race in the world?

The Dinka people of Sudan are one of the tallest race in the world. The males average around 181.3 centimetres on average (5 ft 11 inches).

So why aren’t they at the top of the list? Because they don’t have the highest average, just one of the tallest races. But something suggests that they might also take the lead as being the tallest population on average, given the right conditions.

Health and nutrition has a lot to say when it comes to height. The Dinkas and Shilluks of Sudan would probably grow taller if they had the same conditions growing up as e.g. the Dutch people.

The reason why is that you have a genetic potential of how tall you’ll grow. You can maximise that potential for growth through a healthy upbringing; with the right foods, activities and environment.

In the future, we might see more of the African countries on the top 10 of tallest countries in the world, as their living conditions are improved and their children get to maximise their genetic potential for height growth.

As a fun little round-off I would like to know:

What’s your height – and where are you from? Leave a quick comment below! ⬇️

How Tall to Fly a Jet?

How Tall to be a Mountain?